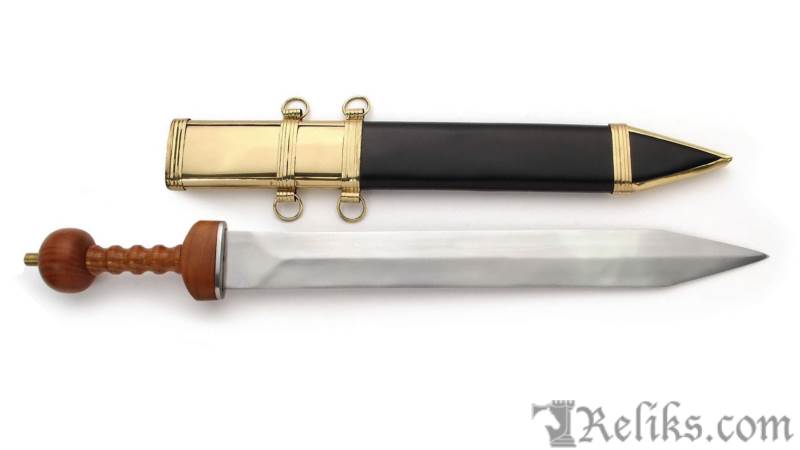 Sword from the Pompeii Ruins

The Roman Military was a feared opponent due to it's advanced formations that would quickly overwhelm an enemy force. One of the most effective use of a gladius was in formation behind the protection of a Roman shield wall. This type of later version gladius known as the Pompeii (circa 100) had a shorter point but were just as effective as the earlier “wasp wasted” blades and were easier and less expensive to make. Under the leadership and advanced tactics of the Roman legions this would become the sword that conquered most of the known world. The Pompeii has an ash and maple handle with a functional high carbon steel blade. The original Roman gladius were excavated from the ruins of Pompeii. You can see examples in H. Russell Robinson's book "What The Soldiers Wore On Hadrian's Wall."

This sword hand forged from a billet of high carbon steel and has a diamond cross section meaning the blade is thicker in the middle and tapers to the edge. The raised centre increases the rigidity of the blade for thrusting however remains flexible enough to absorb the shock of the thrust or slash. The hilt is constructed using Ash and Maple wooden parts. The blade has a full tang that extends through the hilt and secured with a pommel button. Read more about "The Sword of the Roman Army"

"Sturdy, well made, authentic, beautiful craftsmanship, and historically accurate anybody that's disappointed with this sword doesn't know what they're talking about" - Nathan (5/5)

Reliks Response - Sorry about that. To correct this give the brass pommel nut a small clockwise turn. It will tighten everything up.

"It's pretty nice, but not having any others to compare it to not a big judge but the metal scratches fairly easily." - Kevin (4/5)

"I already had a Mainz pattern gladius made by Windlass purchased about twenty years ago and the gladius purchased from Reliks is easily of the same high standard. " - Thomas (5/5)

"The sword craftsmanship is excellent, a fine piece. The scabbard however comes across as cheap, doesn't do the sword justice." - Patrick (4/5)

"This Roman Gladius was exactly what I was looking for. It gave me "chills" when I removed it from the packaging. To have a functional Roman sword in my hands, gave me a deeper historical appreciation which I could never get from a book. Thank you Reliks & staff!!! Great website, friendly staff, FANTASTIC sword!!!" - Mark (5/5)

"This sword is a must have for any Roman enthusiast. The price is great for a fantastic sword." - Leighton (5/5)

"A great sword overall, solid and well made but its one concern is he wooden grip. Its beautiful bit I fear if I use the sword too hard the wood may crack" - Terry (4/5)

"the Gladius gets a 5, it is a great sword, sturdy, solid, easy to use. The sharpening service did a great job on it as well. The rating comes down because the scabbard is a bit light and the throat needs a bit more leather so the sword doesn't move around at all. I can fix it, so I don' mind. The sword makes it well worth the price." - Lauren (4/5)