The Sword of the Roman Army

The Roman soldier carried several armaments including a couple spears (pilum), dagger (pugio) and a sword (gladius). For defense they would have steel armor (lorica), helmet (galea) as well as a large shield (scutum). The sword carried by the Roman soldier is the Roman Gladius. This short sword combined with expert military tactics has certainly carved it's way into the history books as a fearsome and respected weapon.

Origin of the Gladius

The word “Gladius” is believed to have come from the Celtiberians who were a Celtic speaking people from Hispania (The Iberian Peninsula). The Celts there carried a very similar sword that was known as the Gladius Hispaniensis. The Roman legions began carrying a sword of this similar design a couple hundread years BC. After the conquest of Hispania. A derivative directly from the Gladius sword was the Gladiator. The gladiator would be the swordsman who carried the gladius. Another derivative, strangely enough, of the gladius is the Gladiolus or the “little sword”. A plant with sword shaped leaves.

The Parts of a Gladius 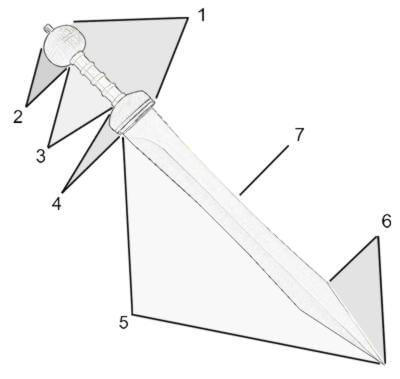 The roman military swords blade was forged from high carbon steel. By this point In roman history the bloomeries (forges) had talented smiths who had a good grasp on smelting iron ore and producing steel weaponry like those we produce in modern forges. Today's blade smiths have the benefit of a couple thousand additional years of steel refining to help further develop their craft.

How the Gladius was Used

The Roman Gladius was most effective used in formation behind the protection of a Roman shield wall. The soldiers would interlock their shields (scutum) giving their opponents virtually no target to strike. They would thrust beside or over the shields cutting down their enemies while the formation advanced. They were trained to take every opportunity and attack every exposed target even if that meant cutting the legs of their opponents from underneath their own shields.

The Roman Gladius was known for its powerful thrust but they also held an exceptional edge and were also used for slashing and cutting.