The greatest hero in Scottish history, William Wallace lived seven hundred years ago. Wallace and his band of lowlanders routed a superior English army despite being largely outnumbered at Stirling Castle. He became known as one of the most valiant freedom fighters Scotland has ever seen. This led Wallace to be Knighted and granted the title “Guardian of Scotland”.

This impressive broad sword has been named appropriately for the valour shown by those freedom fighters. This magnificent two handed early Claymore measures a massive 61” in overall length. The hand forged 47 1/2” blade is constructed from 1065 high carbon steel and fully tempered. The full tang handle is a wood core and finished with a leather wrap. The upper part of the blade is also wrapped in leather to allow a safe grip in close quarters. Large swords like this were not worn but carried over the shoulder with the flat of the blade down without a scabbard during this period. 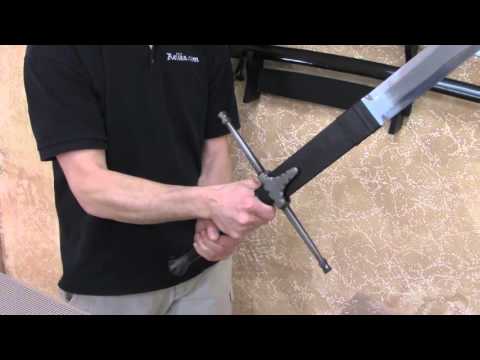 "Couldn't believe the sword is that big...Very nice, and solid. I think it looks more brutal than the Braveheart model! " - Richard (5/5)

"Beautiful, weighty. Actually exactly what I hoped it would be, which is such a rare thing in online purchases. " - Hope (5/5)

"Very good. The craftsmanship I give 9/10 - only because the blade has a noticeable curvature...but it is a very long piece so I really can't complain." - Daryn (4/5)

"Other than the weight, all the specs are accurate. This sword is advertised at 4 lbs 14 oz, but it's really about 6 lbs 9.5 oz. After a good training session, I definitely feel the weight. The blade is good quality; good finish. The fit of the crossguard is tight, but the handle has a bit of play in it. The reason for two marks off is the handle can actually twist around the tang. It requires a bit of effort to twist, but with the forces involved in a dedicated strike, it can twist a bit. I love how accurate the sword is compared to the movie." - Heather (3/5)

Reliks Response - Weight has been corrected

"It's a really nice weapon / work of art, I'm a little concerned that if waved slightly side to side the hilt and blade flex right at the top of the handle and can feel I slight pop as they pass over each other. I hope it's not really an issue. Other than that is amazing" - Eric (4/5)