Historically, swords were weapons intended for close-quarters combat, and expertly designed for that purpose. Edge, point and guard they were constructed in such a way as to maximize the versatile, human-damaging potential of the weapon. However, the tool of the executioner (be it sword, axe or other device) is not designed for combat, instead being intended for the quick death – usually through decapitation – of the condemned. This weapon would not need to be combat worthy, but would still be capable of fulfilling its intended purpose. The DSA Executioner’s sword is one such tool. Designed after a later historical model that survives in the Medieval Crime Museum (Mittelalterliches Kriminalmuseum) in Germany, the sword comes at the tail end of the period in which swords were used in Europe for executions (a period from the 16th century to the 1720’s when this sword was made). It features a long, heavy blade that ends not in a point but a distinctive flat edge. The blade is heavily decorated as many executioner’s swords would be; and while in some cases the sword would be inscribed with the executioner’s name in this case the inscription translates as "I spare no one" – a brutal message for criminals facing this sword’s edge. This limited edition piece in your collection will cause other collector’s heads to roll with jealousy! Available with Standard or Interlaced Sword Belt Scabbard. 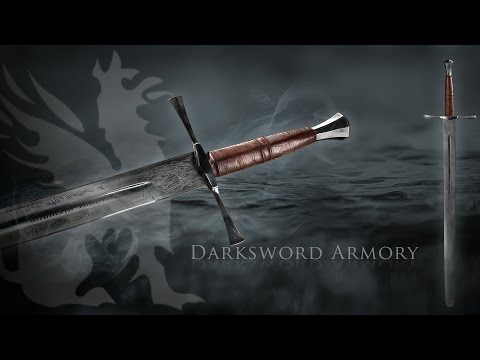 "This sword is great a little wobbly in the handle but it has a long and wide tang. The peened pommel makes sure it wont go any were ,the blade is made of good steel it feels like a cricket bat but it's not supposed to be a finesse weapon. It's a strong cutter as you can imagine being a weapon meant for beheadings. And the etchings are Sweet!" - James (5/5)