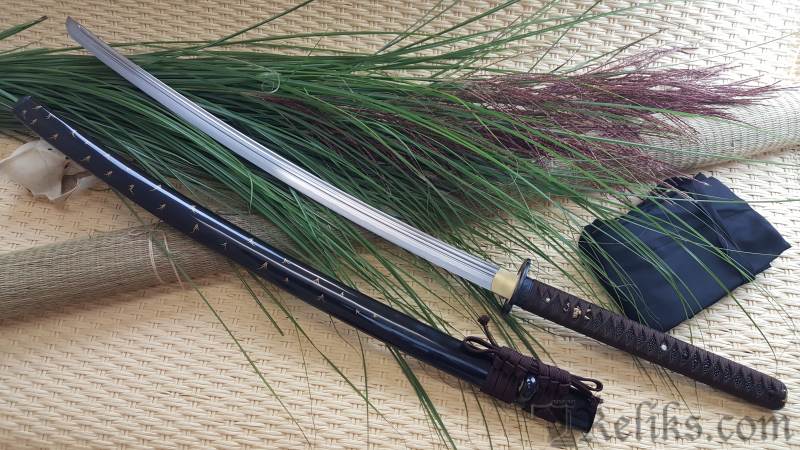 Several years ago we asked Keith Larman of Summerchild Polishing to design a sword exclusively for our customers from the "ground up". We asked for a historically "authentic" blade design along with mounts that would go beyond the typical "pick a theme" type of mounts that pervade the sword market. Keith is well known for his sword mounts that "tell stories" and we gave him freedom to put together a new sword that would be understated and elegant, but still be more than just a typical sword. The Bugei Exclusive "Peace sword" is the result. Keith began by reviewing the various swords currently available on the market. His goal was to design a blade that would be strong, tough, and beautiful, but also be the type of blade that would appeal to modern practicing martial artists. He decided to use a katana originally made by the famous Hizen Tadayoshi school smiths as the basis for this sword. Hizen blades were (and still are) renouned for their beauty and quality of construction. The Peace sword is a robust shinogi zukuri katana with an extended chu kissaki. The blade is moderate in thickness and somewhat wide compared to many designs. However, like the original Tadayoshi school sword the Peace sword is based on, the Peace sword has a shallow bo-hi (full sized groove) and a soe-bi (fine groove) running below the shinogi (ridge line). This allows the sword to remain robust and durable with a good cross-sectional thickness all while helping keep the overall weight of the sword down. The sword moves easily in the hands, is extremely sharp, and is still of a robust design for cutting practice. Keith also asked Hanwei to have the smiths making the sword fold the steel billet an extra time before finishing the blade. Hizen blades were renouned for their very fine hada and Keith wanted to pay tribute to their work. We also asked for a sedate suguha hamon (flat hamon) which was one of the styles of the Hizen smiths. The hamon is deep with vivid nioi and on close inspection you can see the interaction of the suguha with the underlying finely folded steel. It makes for a more subtle but very elegant look. It also gives the sword a serene appearance. Deadly in appearance, but calm and serene. It appears simple, but the closer you look, the more you see. Which are of course attributes that would appeal to the samurai of old. Calm focus. Peace. Understated elegance.

Keith then started in on the design of the mounts. Here's what Keith had to say about how he approached the project. "Once I had decided on the Tadayoshi School katana as the starting point for this project I looked towards the general time frame that swords like these would be first used. I had recently been reading a book by the Japanese poet Basho and was decided to revisit an idea I had worked on before with a very high end custom mounting. This blade with it's calm but deadly look evoked a feeling of the very nature of being a warrior. The good things, the bad things, and then the fact that life continues on even after the battle is done. And given the number of friends of mine currently serving in the military giving their all I wanted to do something to remind people of their work and their sacrifice."The Basho poem is often called "Summer Grasses". It reads "Natsukusa ya tsuwamamono-domo ga yume no ato". Or loosely translated "Summer grass: where the warriors used to dream". (Basho, translated by Hiroaki Sato, Basho's Narrow Road. Berkeley, CA: Stone Bridge Press, 1996. Page 87.) Keith explains the poem this way."The haiku was written when Basho visited an area that used to be occupied. The story goes that a number of loyal samurai were left there to defend the area and were wiped out in battle. Over time the area was abandoned and nature reclaimed the fields. The poem evokes both the feeling that the samurai who were there would have spent their time thinking and dreaming in this lovely area. They are warriors but they are also sons, fathers, brothers and friends and they would have had the same dreams as anyone else. But now, after their death, all that remained of those samurai and their dreams were the summer grasses now taking over the land. So dreams, lost dreams, the passage of time, but also the ongoing cycle of life. I find the poem by Basho can evoke a number of feelings in me on many different levels. So I decided the sword design should also carry that idea of trying to represent the varied levels of meaning. The mokko raised rim tsuba was designed to show the original field with a single bleached skull on the ground. The mokko shape was chosen as many practitioners like the fact that the sword doesn't tend to "roll around" when placing the sword down on the mat when preparing or finishing practice. Keith wanted there to be something to show the reality of battle and war. Tsuba with these sorts of designs were appealing to the samurai. One had to accept the invevitability of death in order to transcend the fear of it. The higo style iron fuchi kashira and kojiri were designed with a background of the same field but with the classical higo design element. No skulls here -- just the ground field and grass on the fuchi with the sky represented in a subtle fashion in classical higo style fittings. Higo style brown silk ito was chosen for the wrap with the typical higo blackened samekawa. The menuki chosen were single gold horses. Keith wanted to show the horses running free without saddles or other samurai gear to help show the idea of the horses returning to the wild after a chaotic battle. Finally the black gloss saya (scabbard) shows the summer grasses starting to grow. They are hand brushed in gold paint and gradually increase in frequency towards the iron kojiri but never overpower the simple black gloss saya. The custom made sageo (cord on the saya) is black and gold with gold grasses woven into the sageo, carrying the theme. Keith was adamant that the saya be a bit thinner from side to side than most production saya as he feels they are too bulky. He also had the kurigata placed closer to the koiguchi to ensure a robust sayabiki for practicing martial artists. The dimensions on the saya are more like antique saya than modern production saya in these ways. "Today there are more and more swords on the market. Most, however, most seem to miss the subtle details that differentiate a decent reproduction sword from something that really is a faithful representation of what these things really used to be. I wanted this sword to be as faithful as possible, raising the bar even higher for Bugei's Exclusive swords. I also wanted to avoid the "flash" and gaudy look that seems to overtake so many swords. I went with an understated, old look because I wanted this sword to look like a it could have been picked up in that field of summer grasses all those years ago," states Keith.

The Peace Wakizashi is a great companion piece to the Peace Katana. Made in the same tradition and high quality materials as the katana.