The True Sword of Persia

The Kopis is a very unique sword with a clever design. The forward curving blade is called a “recurve” and it's design is used today in the form of utility knives, combat knives, swords and the world famous kukri. The uniqueness of this blade shape is not built for aesthetics but of physics and is capable of delivering a powerful slash with the momentum of an axe while using the long cutting edge of a sword. The name is derived from the the Greek word Kopides (to cut or strike) with alternative roots from the Egyptian Khopesh (heavy knife with a forward-curving blade).

The kopis found itself being favored and recommended by generals as an effective cavalry sword. The recurve was better suited for delivering powerful blows from horseback then the more traditional straight bladed swords previously used. The kopis was later replaced in the 16th century by the Persian shamshir which more closely resembles the cavalry saber's that we are familiar with today. The early Acinaces were short thrusting swords and were made famous by the Persian military yet weren't quite as desirable from horseback. Interestingly enough even the Persian foot soldiers were often depicted in Greek art carrying forward curved swords resembling the kopis. 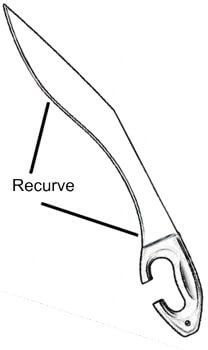 It is difficult to mention the kopis without some form of comparison to the Iberian falcata. Both of these swords share remarkable similarities and ran parallel through history. Historians believe that this is coincidence and that there is enough small differences between the two swords that the kopis is a sword of it's own and was not a descendant of the falcata. It is not out of the realm of possibility that two cultures could have developed similar swords or equipment to fulfill the same needs. We have seen many examples of this happening especially in today's sword and knife industries. Those that disagree believe the falcata may have been acquired through traders or merchants and then slightly modified and re-produced for their own needs as the kopis. I think there is room for argument on both sides but will leave it there for you to decide which you believe.

Used on horse or on foot the shear cutting power of the kopis is undeniable. Whether or not it was birthed by the Etruscan's as some scholars suggest or is simply a sibling of the Iberians falcata the kopis by its own right is an effective and powerful single handed sword that commands respect and accreditation from every sword enthusiast for it's contribution to sword history.