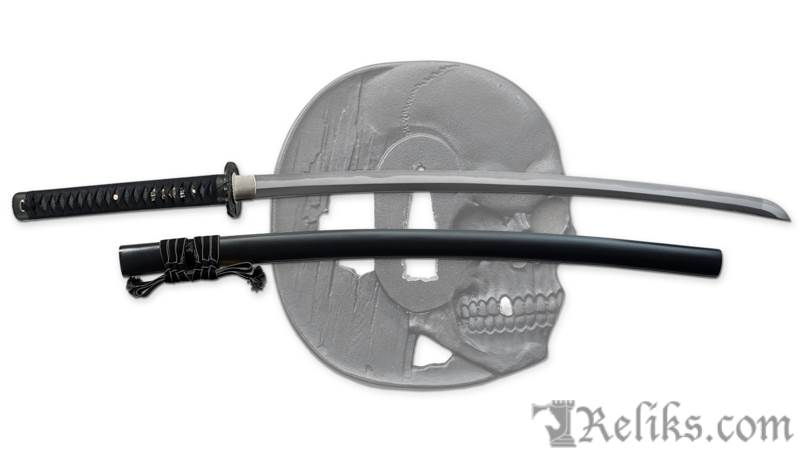 The Katana of Death

There is no subtle way to describe the lethality of a sword named after death itself. The Shi (death) katana. The Shi has been described as “Blackest of the black and deadlier than death” by Frenchie Jin and Dragon King Forge while it epitomizes the true function of the Japanese katana when carried to its ultimate end. Powerful, foreboding and deadly sharp, the Shi Katana possesses a thirsty blade and its owner must be one who can harness the power wisely.

This katana was thought out perfectly for harmonious aesthetics. The tsuba is a piece of art with a beautiful embossed image of a samurai drawing his katana forming the contours of the guard. The reverse side of the tsuba reveals the image of death following the same contours to form a skull. As described by Dragon King “When traditionally worn, the flash of the black skull shaped tsuba (guard) and kanji embossed fuchi and kashira (pommel) warns any would-be assassin that to challenge this warrior is to court your demise.” The dark color palette used in the saya, tsuba, fuchi, tsuka-ito, same and kashira are contrasted perfectly with the triple silver skull menuki peeking from behind the wrap. The same silver is carried out through the kashira-gane, seppa and habaki giving it the right amount of highlights.

This katana is built for function and is made for tameshigiri and the martial artist. The 11 ½” tsuka (handle) features a black-on-black tsuka-ito (handle wrap) and same (ray skin) handle for superior grip. It features a 28” T10 forged steel blade which is not a traditional sword steel. This tough modern tool steel is very resilient and is suitable for master and student level practitioners. The blade is custom fit to the hand carved, textured matte black saya. The saya is adorned with a buffalo horn kurikata (knob) sageo (cord).

"Im very happy with it I always wanted a katana it seems like a real sword to me though I'm no expert, can't wait to try it on some bottles" - Raymond (5/5)