The Origins of the shasqua can be traced back to the 12th century to Caucasus near the border of Europe and Asia. It was the weapon of choice by the tribes residing in the Caucasus mountains. It can be found throughout regions with different spelling variations Shashka, Shashqa and Shasqua but in all cases it refers to a long single edged, single handed guardless saber. It was most likely derived from the Adyghe word "Shash ko" - meaning "long knife". It was adopted in Ukraine by the Cossacks and by the 19th century was used by all cavalry units except the Hussars, who remained loyal to the traditional saber.

The Sword of Russia

Russia was introduced to the shasqua in the 1830's and officially declared it later as the official sword for the Russian military and Police forces. This version has a brass pommel marked with a star, sickle and hammer representing the 1881's piece adopted by the Soviet Union.

This sword is hand forged by Windlass Steelcrafts with a true high carbon steel blade. Although this swords edge is un-sharpened it is capable of holding a very sharp edge like the original shashka with our optional sharpening service. The hilt features detailed brass casting work with a hand carved hardwood grip. The Shasqua also includes a rigid leather sheath complemented with matching brass capped tip and collar around the sheathes throat. 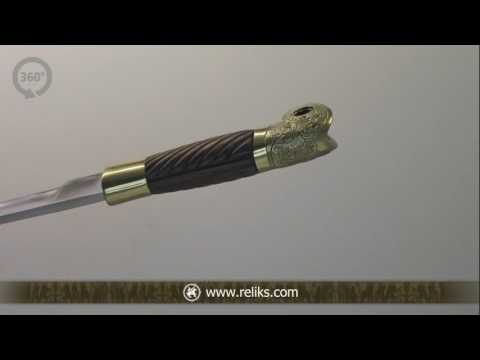 "The shasqua I've got is of good quality, looks great and to my knowledge is built close to the original standards." - Vladislav (5/5)

"For the price, it is quite an excellent sword; the balance is extremely far from the handle, so it may be fairly unwieldy for those that aren't used to it. The handle work is quite nice for the price. The Scabbard is rather low quality (possibly faux) leather, but that's to be expected from the price range. My only complaint are as follows: 1)The blade I received has a slightly wavy edge. I have no idea if this is an issue that occurred due to shipping (which I highly doubt) or if it was due to the original manufacturing (which I find more likely). However, this isn't a problem in my case due to the fact that I use it as a practice sword. Hence I would recommend this as such. 2) The Scabbard is extremely loose. As a result, the sword (when tipped too far forward) will slide out of the scabbard simply by its own weight. Again, this isn't an issue in my case as I practice drawing techniques a lot; thus the loose scabbard helps a lot due to the lack of friction." - Peter (4/5)