The Chinese characters for Tai Chi Chuan can be translated as the” Supreme Ultimate Force". For others the combat aspects of Tai Chi are of considerable interest. Because the Tai Chi movements have their origins in the martial arts, practicing them does have some martial applications. In a two person exercise called "push hands" Tai Chi principles are developed in terms of being sensitive to and responsive of another person's "chi" or vital energy. Long-time practitioners of Tai Chi who are so inclined can become very adept at martial arts. The practical exercises are also situated in a wider philosophical context of Taoism. Tai Chi also has, particularly amongst eastern practitioners, a long connection with the “I Change” a Chinese system of divination. In the 13th century A.D., a Taoist monk by the name of Chang Sang Feng developed what has come to be known as Tai Chi. Subsequently Tai Chi came to be associated with different families in China. These family names came to designate the different styles of Tai Chi. The style from which all current styles of Tai Chi were developed by the Chen family. A man by the name of Yang subsequently studied with the Chen family and later modified the Chen style, thus developing the Yang style of Tai Chi Chuan. The Yang style is the most common traditional style of Tai Chi Chuan practiced today. This light weight Tai Chi sword has an overall length of 37 1/4" with a flexible 29" blade. This piece weighs only 0.6 kg unsheathed.

"It is very impressive, my Tai Chi teacher thought it is a good size and weight for a beginner, well balanced, well made and beautifully decorated with dragons for prosperity." - Christine (5/5) 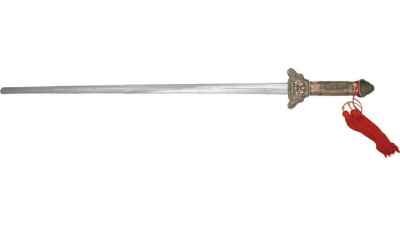 A perfect training weapon for Tai Chi forms without the size. This tai chi exte... more 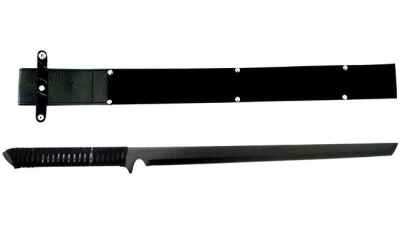 The Samurai ruled over 800 years ago and controlled the land and it's people. Th... more 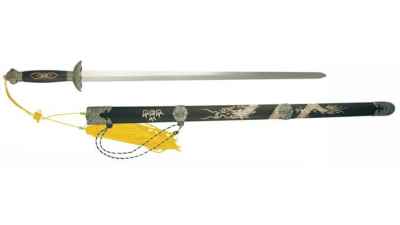 This light weight Tai Chi sword has an overall length of 38 1/2" with a spring s... more