The Roman Army's approach to warfare was direct and pragmatic. It chose the Gladius as its principal sidearm because it was practical, efficient and excelled in any close combat situation. The early Gladius (our version is the Maintz pattern) was wasp waisted with a long point that combined cutting power and stabbing ability in one handy weapon. Later versions were not waisted and had a shorter point but were just as effective - and easier to make. Both swords served side-by-side for many years and it was not uncommon to find 4th century Legionaires carrying the earlier model. This is the sword that conquered most of the known world. This gladius in the maintz pattern has a faux ivory grip with ornate brass applique on the scabbard. This sword is hand forged by Windlass Steelcrafts. CIRCA 100 .Originals were excavated from the ruins of Pompeii. You can see examples in H. Russell Robinson's book "What The Soldiers Wore On Hadrian's Wall." Read more about "The Sword of the Roman Army" 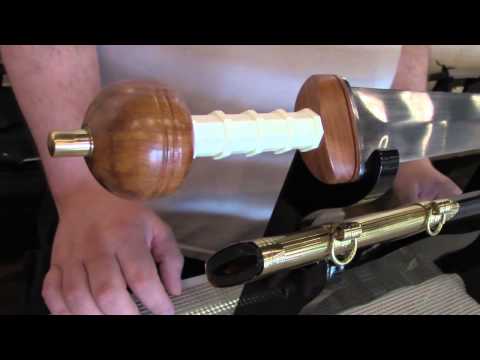 Our impression of the Roman Gladius Maintz Pattern

We have offered the Maintz pattern for several years and the quality has always been very consistent. The wood fittings are finished nicely and the blade has the unmistakable character of a hand forged blade. Assembled with a traditional threaded button makes for easy blade adjustments. The only change in design over the years has been the grip, which changed from real bone to a synthetic. The bone handles were becoming too dry and cracking during use. The new synthetic handle preserves the aesthetics of the earlier model's with increased durability while performing sword drills.

"Excellent reproduction. Compares favorably with museum pieces I have viewed. It was a gift for my son who is a very discriminating collector of historic pieces and he was extremely pleased with the workmanship and overall quality." - Christopher (5/5)

Reliks Response - We used to use bone, however it could crack an chip easily while in use. The new synthetic handle is very durable.

"On the heavy side for a gladius has a lose metal cap over the hilt every thing else is good." - Keese (3/5)

"This was a gift for a friend that is a Roman History Fan. It's an absolute perfect addition to his collection." - Dana (5/5)

"Windlass makes good quality swords. My only complaint is that the shape of the Mainz sword is not really very close to the true artifact." - Kenneth (3/5)

"Beautiful sword but the sheath was loose and upon looking inside the wood seems to be slightly split so the sword is a bit loose. If held upside down it will fall out on its own unlike my viking sword I got which is much more snug and does not fall out." - Horatiu (4/5)

Reliks Response - The gladius normally have a loose fit

"I love it. It's just what I expected. This sword is of a museum quality replia. Historically correct in it's making. Functional and battle ready. I had it shrpened and they did a great job. Thank you for having this available in your store for people like me who collect and value these weapons." - Aurelio (3/5)