The Two Handed Medieval sword, was very popular in Germany during the mid to late 15th century. As the Middle Ages progressed, this versatile Sword continued to evolve according to the battlefield requirements of the day. The dedicated cutting designs of the 13th century gave way to the thrusting oriented swords of the late Medieval Era. By the Gothic period, the type XVIIIa two handed sword, with its rigid diamond shaped needle tip blade, became the most essential part of the medieval Knight’s arsenal. The hollow ground sword blades were not only capable of powerful cuts, but offered exceptional advantages with their keen ability to piece through the ever developing plate armor. Not only did the fifteenth century longsword possess a blade profile that allowed for effective thrusting, it also retained a large measure of its earlier ancestor’s cutting ability. The simple, yet elegant simplistic geometry of the sword reflects the Gothic artistic revival that not only inspired bladesmiths and armorers but also architects and painters of the period. The deeply hollow ground blade and clean hexagonal quillions and fishtail pommel attest to this artistic revival. Swords during this period were not only exceptionally engineered, but also reflected clear artistic patterns and influences from the gothic architectual structures of the time. Hence, the Two Handed Gothic medieval sword, and thus Type XVIIIa medieval battle ready swords, were not merely weapons of war, but beautifully crafted artistic pieces in their own right. The Two Handed Gothic battle ready Sword, is our staff’s top pick. Not only for its elegance and simplicity, but its superb handling characteristics. This medieval sword is light, superbly responsive and very well balanced. Authentically crafted from the original at the Landesmuseum (Museum in Zurich), the Two Handed Gothic Sword is a testament to the superb skills and craftsmanship of the later part of the middle ages. Elegant, resilient and reliable, the two handed gothic sword is a heirloom-quality medieval sword for the ages. Skillfully engineered and individually crafted, the two handed medieval sword will surprise even the most discriminating collector. Available with Standard or Interlaced Sword Belt Scabbard. 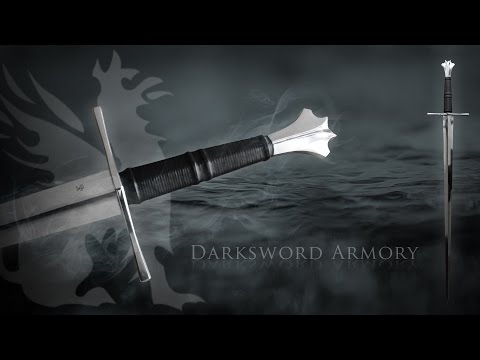