Displaying a Japanese Sword or Katana

There are a few things to consider when displaying your samurai or Japanese katana aside from would you like to hang them on the wall or would you prefer to put them on a more traditional stand. If your aim is authenticity or tradition you may wish to consider the following before you display your swords.

The samurai would normally possess three swords. The katana which is the most recognized full sized samurai sword and is often the first piece in any collection. The second would be the wakizashi which is a mid-sized sword that resembles the katana and then the third which is a tanto. The tanto is the shortest of the swords or in many examples can be as short as today's standard survival styled knife. The display of these swords in the samurai warriors home was not strictly about aesthetic appearance but also served a functional purpose in day to day life. When a samurai was to dress, he would first put on his tanto followed by the wakizashi and lastley the katana. So for practical function the katana would come off first while undressing and be placed on the lower rack. The wakizashi would be placed in the middle position and the tanto would then be placed in the top position. This leaves each piece ready in the correct order for dressing the next day. This has been debated on whether or not the order is correct and has been widely accepted as the proper order. In the case of a two tier stand that has a shelf instead of a third tier the correct order would be the tanto on the shelf. Katana on the bottom and then the wakizashi would be on the top.

All samurai trained to be right handed warriors. If you were left handed you would still practice and learn the katana with your right hand. This was a social rule and one that could save you from unnecessary life shortening duals. Samurai would regularly pass each other on narrow foot paths and walkways. The right handed Samurai wore his katana on his left hip and would allow others to pass him on his right. The other samurai's sword would also be on his left hip with no chance that the passer can bump into it or have the swords knock each other. If one samurai wore his sword on the right hip he would constantly be in a position where his sword may make contact with the passer and it is considered a great insult to bump into a samurai's sword. This type of tradition is also seen in how the samurai sword is displayed. Handles are always on the left to represent times of peace or to display to your guests that they are not under any threat as your sword is in the wrong position for an easy attack. In times of war it is acceptable to place the handle on the right. If your home were to be invaded you could quickly draw the sword from the display in an immediate attacking motion.

The last thing to ensure is that your blades cutting edge is always facing up. This to is not an aesthetic choice, it is one with a functional purpose. In a time of war this puts the sword in the correct position for a samurai to use it quickly based on his sword training. The more relevant reason in modern times is that it will preserve the edge on your blade. Having a samurai sword sharpened is a very long process of finely polishing away or removing blade material. You don't want to do this more than necessary in order to preserve the longevity of your sword. If the swords edge constantly rests on the inside of your wooden saya, it will begin to wear or dull. Even subtle vibrations can cause this to happen. By displaying or storing your katana with the edge facing up, only the swords spine will be in contact with the saya preserving your edge.

Can I display katana non-traditionally?

Absolutely, they are your swords and they can be displayed how they are most aesthetically pleasing or most functional for today's life. Just keep in mind that they are swords so display them safely. In Reliks showroom we display many swords in a non-traditional manor but in the same spirit of a traditional display. It is very common for us to reverse the order of the swords for the purpose of function. At Reliks we don't dress in daily samurai attire and don't require the tanto on the top to start the process. At Reliks nine out of ten people will be drawn to the katana before the wakizashi and tanto. In the spirit of the original display but with this cultural difference, that puts the katana on the top because it will be the one most often and the first to be removed from the display to show to our customers. We do traditionally display the handles on the left and the blades are always up for obvious practical reasons. 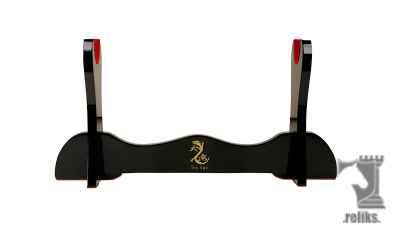 The Single Deluxe Sword Stand is a perfect solution for the sword collector to d... more 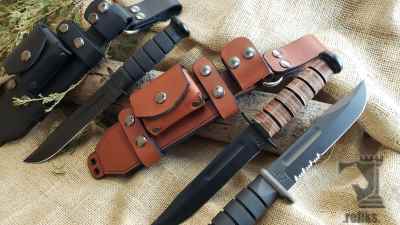 The Dual Carry is one of the most popular outdoor sheath designs for a reason. A... more 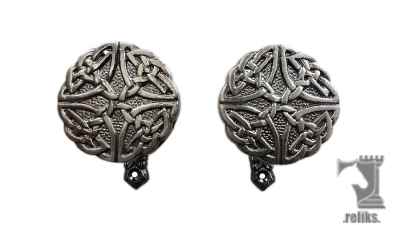 Display your swords with this pair of Celtic knot-work themed hangers. These swo... more